To share your memory on the wall of Larry VanAllen, sign in using one of the following options:

A receipt has been emailed to the address provided. A receipt may also be printed.

When you hear the name Larry Van Allen, what do you think of? What kind of accomplishments would you think he would list for himself? Well Larry was, well Larry. To describe him and his accomplishments in a few words how would you do it? Here is our version of Larry, our Dad, our grandfather, our great-grandfather.
Anyone talking to Larry would know that his family was his greatest pride and joy.
He would tell everyone he met he was the “luckiest man on earth because he had two families (his and Joan’s) that loved him immensely.

He survived 4 daughters through their teenage years and one son (who wasn’t nearly as unruly, according to dad). However, the running joke with dad was “who was the favorite” of the day (as it usually was the one who was taking him here and there). When it was all said and done, we all were his favorites in our own way.

Dad was very proud of his kids, but his grandkids and great grandkids brought him the greatest pleasure. His grandchildren Larry, Michele, Kaylee, Matthew, Andrew, Allison, Kathryn, Joe, Ryan, Sarah, Kyle, Brianna, and Evan. Dad loved going to all the school functions and sporting events to cheer on the team (However when Caledonia-Mumford played Avon he would cheer for both).
When the great grandkids came along Dad’s smile got even bigger. Nothing he enjoyed more than having a flock of kids running all over his house. He had a lot. Addy, Charlotte, Baby Vivian, Lane, Jack, Devon, Georgia, Oakley, Anneke, Morgan, Elizabeth, Mason, Elliott, Jude, Theo, Ryann, and Cooper Joseph, Faithlynn, Shawn, Aaron and Zachary. Sadly, he will not see the birth of another 3 great grandbabies.

Dad was a proud member of the Lion’s Club for 26 years. Even when he could no longer safely drive at night, a Lion would come pick him up and take him home so he could still attend his meetings. He was very proud of this organization.

While he was raising his kids, Dad was not a religious man. He made sure to attend our first communions and confirmations even though he was not Catholic. However, after meeting Joan, he began attending Aldersgate Church. He attended faithfully every week and during COVID, he would have Cindy help him get the church service on line (Dad had no idea about computers). He would sit back with his arms crossed and his eyes closed and claim he was listening and NOT asleep.

If we had to list his greatest accomplishment, we would have to say it was bigger than life personality. You would be hard pressed to find a person he did not know. When we took him up for his Covid vaccine in Syracuse, one would think Dad would not know anyone. And he didn’t but as we pulled him backwards on the rollator walker, he was having a conversation with the gentleman behind him. Long and behold, the two of them started talking about the airshow in Geneseo and how great it was.

When we took dad places, we knew it was a day long excursion, as he had to take his time to talk to people, get the butchers to cut his steaks just right, and make little stops here and there.
Dad always said that he was the richest man in the world. Not money-wise, but by the amount of love he had inside him. We could all take a lesson from Larry. Take time to enjoy your family, to talk to people, and look around at all the blessing you have been given.

Friends may call Wednesday from 3-7 PM at the Stephenson-Dougherty Funeral Home 350 Genesee St. Avon, where his Funeral Service will be held Thursday 11 AM. Interment St. Agnes Cemetery, Avon. In Lieu of flowers memorials may be made to the Lions Club of Avon PO Box 293 Avon, NY 14414.
Read Less

We encourage you to share your most beloved memories of Larry here, so that the family and other loved ones can always see it. You can upload cherished photographs, or share your favorite stories, and can even comment on those shared by others.

Posted Jul 02, 2021 at 12:31pm
We have sent a gift of trees to be planted in Larry's name. We all loved knowing him. Robert, Patricia. and Annabelle Kurtz
Comment Share
Share via:
DH

Posted Jun 30, 2021 at 10:58am
I am sorry that my wheelchair bound wife and I were not able to attend Larry's calling hours but we want the family and Larry's friends to know that we loved Larry and his joyful manner! He always seemed so happy when we saw him at Aldersgate Church. The world lost a great disciple when Larry passed but heaven is one soul fuller with Larry there!! Becky and I extend our deepest and most sincere condolences to the family. May peace come quickly to you all!
Grace and Peace, Doug and Becky Hess
Comment Share
Share via:
RR

Posted Jun 24, 2021 at 01:55pm
My sincere condolences to the Van Allen family. Larry was a true friend of mine for over 40 years. Larry loved everybody especially his family. We shared a lot of good times togetherThose memories I will cherish forever. May God bless Larry and may he Rest In Peace.
Randy Raso
Comment Share
Share via:
LC

Posted Jun 24, 2021 at 08:03am
Wishing you peace to bring comfort, courage to face the days ahead and loving memories to forever hold in your hearts.

Posted Jun 22, 2021 at 05:47pm
Please accept my most heartfelt sympathies for your loss. My thoughts are with you and your family during this difficult time. With all my love. 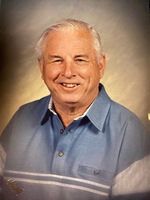